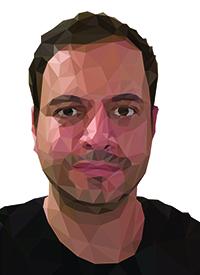 Parallax is a visual effect where you combine at least two layered images moving at different speeds to achieve a sense of depth.

If you are a fan of video games you’ve certainly seen this effect before: two or more images are placed one over the other, the background moves slower, and the foreground, which could be the player’s avatar or the foreground where he stands moves faster.

This is an often used trick in the video games world. It started to be used quite long ago, an example is the Super Mario video game series.

This effect has been adopted in the user interface area, where you can see it used on web sites and also some applications.

My goal was to bring this to JavaFX in the form of a control, where you could, through a simple API, add a parallax effect.

Parallax in a ListView

My first objective was to bring this to the ListView, that is, have a control with an API similar to the ListView where you could set the background image and the list of items just like in the JavaFX ListView. This control would be named the ParallaxListView.

To have a parallax effect the items in the ListView, that is, the cells, need to scroll with the background but at a faster rate.

The first challenge is that the scroll of the JavaFX ListView is done through jumps, that is, when you do a scroll action the position will jump from the original position to the end position without going through the intermediate position values. This will break the effect, since there is no movement like in the real world, only a discrete set of positions. In the real world the objects in the foreground move faster through a translation animation, remember this is about mimicking real world phenomenon like the driving example I gave earlier, to give a sense of depth.

So to accomplish this I had to implement my own ListView scrolling as well as the background scrolling, which when scrolling animates through a set of positions. The following is a live capture turned into a GIF of an example application using the ParallaxListView, the live version image quality and animation is better:

Where to get it

For now you can get it here: https://github.com/dukke/fxparallax.

I decided to stick with Java 8 as Java 9 is still relatively new and some people might have not yet migrated. This way Java 8 and Java 9 programs can use it.

I’m using private API, namely VirtualFlow, but this has turned into public API in JavaFX 9 so it will be easy to migrate the ParallaxListView code.

The test folder has examples of how to use the control.

You have to scroll through the mouse wheel to see the effect.

The ParallaxListView can give a nice touch to your application, adding a bit of flair, however don’t overuse this effect.

In the next days I plan to add the following: