I’ve just released a new update for JMetro, bumping the version up to 3.3.0.

In this update you’ll find:

A new JMetro style has been added for Tabs (and TabPane):

You may notice a slight ghost effect when changing selected tabs in the light style (a white border surrounds the tab that was just unselected). I only noticed this recently when reading this post again. This issue doesn’t exist in JMetro itself but it’s actually a problem with the GIF image presented above.

I’d also like to mention that these styles for Tabs and TabPane don’t exist in Microsoft’s Fluent Design System (FDS) specification, they only exist in JMetro. I made them because this is a control that exists in the JavaFX SDK, it’s an often used control and it was also a feature request.

JMetro does not try to mimic FDS it is rather a Java (JavaFX) theme inspired by FDS.

Before this JMetro version the dark and light style of the Context Menu looked the same: 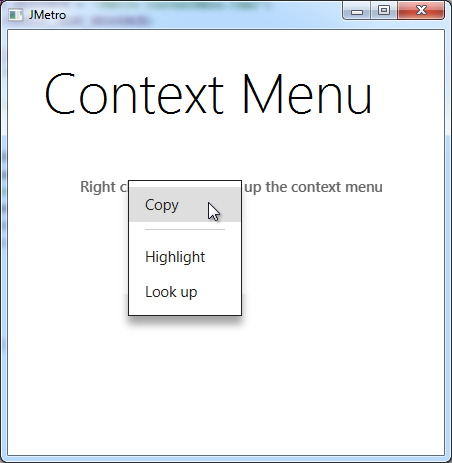 With version 3.3.0, a dark theme has been added, and the light theme has been retouched, and made slightly more compact along with changes to color, etc:

That’s it for this post. 3 new styles have been added/retouched: TreeView, Tabs and ContextMenu. Follow me on twitter and subscribe to this blog if you want to stay up-to-date on the latest news. I’ll update the documentation in the next coming days.

Here’s what I have planned next for JMetro:

One thought on “JMetro “Metro” Tab, TreeView and ContextMenu for Java (JavaFX)”