The Progress Bar has two possible states: determinate and indeterminate and the new JMetro version has different styles for these two. In this post I’ll also go into a few details about some API design principles I abide by in JMetro.

I have a few principles regarding the API of JMetro. One of them is that it should require a minimum setup and have a minimum required API. This means that, for instance, with only a few method calls you can have JMetro applied as the theme. Right now, only these two line of code are required (that can easily be collapsed into one):

It also means that I try not to introduce new controls, except when they should absolutely be introduced. For example, with the new Text Field and Password Field style I could have introduced new controls, since both of these controls add new features like the clear and show password buttons. Instead, I’ve opted to add these new features by introducing new skin classes that you can use in the original controls.

This approach has two advantages:

You can also configure most of the controls new looks through CSS properties, which allows you to keep using the same Java code as before (when you were not using JMetro). In the future I might add new API to also configure these features through code (e.g. Java code) but I still plan to keep the minimal required API.

As usual I’d first like to show how the Progress Bar used to look like in the previous version: 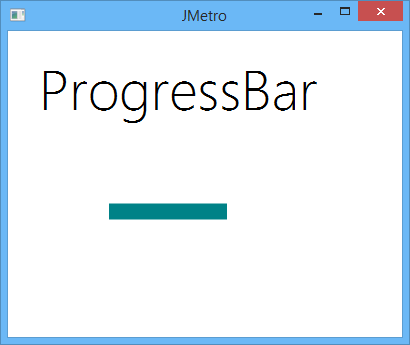 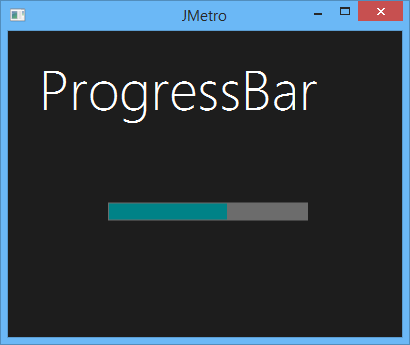 In contrast, when you can’t determine the amount of progress that has been done or, for some reason, you don’t want to calculate it, you’ll set the state to indeterminate. This won’t show how much progress has been done.  But it will at the very minimum show that some computation is underway.

Inspired by Fluent Design, you can see the new styles for the Progress Bar below. Now the two states are represented by two new different appearances. Since my last post on twitter, I’ve tweaked the indeterminate animation a little bit.

The animation above might not look as smooth as in the live version. I didn’t have time to post a video instead of a GIF. That would possibly demonstrate the real result, better.

There is no difference between the dark and light versions.

I tried to make the CSS styling of the new Progress Bar as similar as possible to the original JavaFX Modena CSS.  You’ll still find a “track” and a “bar” CSS style class, that you can style, just like in the Modena stylesheet. This was not possible for the indeterminate state, since the appearance is completely different.

For the indeterminate state every “dot” is a Region with style classes: dot and dot_<number>. <Number> is the position of the dot, starting from 1. You can style every “dot” however you want since each one is a Region.

For example, if you wanted the dots to progressively be darker you could add in the following CSS:

ACCENT_COLOR is a JavaFX CSS variable defined in JMetro that specifies the accent color for the JMetro theme. derive(..), is a JavaFX CSS helper function that darkens or lightens the given color depending on whether the passed in percentage is negative or positive.

This example would give the following result:

A new style for the Progress Bar has been added, in JMetro version 4.6. In this post I also outlined some of the design principles behind JMetro.

Like before, you can check the JavaFX theme JMetro page for updated documentation (will be updated with this new version soon).

JMetro is quickly reaching version 5.0. All the most difficult controls I had planned to add till version 5 are done. In the next few releases I plan to clean up, re-tweak some styles and add the possibility to specify the accent color of controls. Possibly, I can also add a new control style, till then. Ahh.. and making JMetro available in Maven Central.